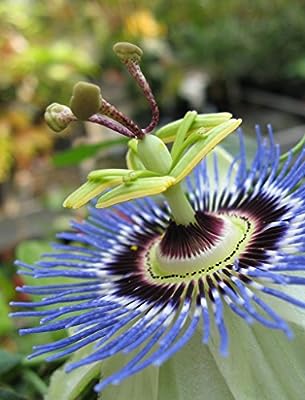 Price: $5.00
As of 2021-12-05 03:36:07 UTC (more info)
Product prices and availability are accurate as of 2021-12-05 03:36:07 UTC and are subject to change. Any price and availability information displayed on https://www.amazon.com/ at the time of purchase will apply to the purchase of this product.
Availability: Not Available Discontinued
Buy Now from Amazon
Product Information (more info)
CERTAIN CONTENT THAT APPEARS ON THIS SITE COMES FROM AMAZON SERVICES LLC. THIS CONTENT IS PROVIDED 'AS IS' AND IS SUBJECT TO CHANGE OR REMOVAL AT ANY TIME.

Blue passion flower is one of the hardiest and most popular species of passiflora along with p. incarnata. The extreme desirability of this Brazilian perennial vine as a cultivated ornamental is the result of its breathtaking blue and white flowers, which are sweet-scented and can measure up to 10 centimeters. Like incarnata, it is extremely hardy and fast-growing, which makes it a great rootstock for other species of passiflora such as p. edulis. The vine itself can stretch to thirty feet, and it can reportedly withstand temperatures as low as -15 degrees Fahrenheit. In frosty areas, the foliage will die back but the roots will remain. Be sure to mulch the roots in the fall to protect them from the cold. It is ideal for decorating structure such as fences, lattice, trellis and mailboxes and will thrive in almost any soil as long as it is well-draining. It has the added benefit of attracting butterflies and hummingbirds. Plants can be propagated by cuttings, layering or seeds. Woody cuttings should be taken in early summer. The seeds can be collected from the fruits that have fallen from the vine and dried. However, fruits will not form in all environments. The flowers, although to a lesser extent than p. incarnata, are used fresh or dried to make a relaxing tea that is useful for anxiety relief and insomnia. The leaves contain small amounts of cyanide and should not be ingested. Boiling is said to remove the toxins. Blue passion flower also contains small amounts of at least one MAOI and should not be consumed along with certain foods or drugs.