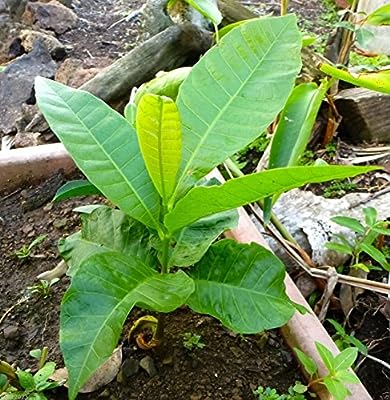 Price: $6.97
As of 2022-05-16 22:55:16 UTC (more info)
Product prices and availability are accurate as of 2022-05-16 22:55:16 UTC and are subject to change. Any price and availability information displayed on https://www.amazon.com/ at the time of purchase will apply to the purchase of this product.
Availability: In Stock
Click and Choose Options
Buy Now from Amazon
In Stock.
Product Information (more info)
CERTAIN CONTENT THAT APPEARS ON THIS SITE COMES FROM AMAZON SERVICES LLC. THIS CONTENT IS PROVIDED 'AS IS' AND IS SUBJECT TO CHANGE OR REMOVAL AT ANY TIME.

5 Seeds - Cashew Tree Seeds, Anacardium Occidentale, Rare Tropical Plant Tree The cashew (Anacardium occidentale) is a drought-resistant evergreen tree native to Brazil but now grows in many parts of the world, including the West Indies, South America, India and Mexico. Cashew trees produce red or yellow fruits, called cashew apples. Attached to these are the cashew nuts that are harvested and eaten throughout the world. Cashews are not difficult to grow under the right conditions. Cashew trees are attractiveCashew Tree Seeds,Anacardium Occidentale, Rare Tropical Plant Tree ~ 5 Seeds trees with large leaves and pretty, pink flowers.Cashews, as you know them, are nuts. However, the cashew nut is not the only fruit of the cashew trees.The cashew nut is inside the funny looking, kidney shaped shell that is attached to the bottom of the cashew apple.The true fruit of the cashew tree is a kidney or boxing-glove shaped drupe that grows at the end of the cashew apple. The drupe develops first on the tree, and then the pedicel expands to become the cashew apple. Within the true fruit is a single seed, the cashew nut. The seed is surrounded by a double shell containing an allergenic phenolic resin, anacardic acid, a potent skin irritant chemically related to the better-known allergenic oil urushiol which is also a toxin found in the related poison ivy. Properly roasting cashews destroys the toxin. Some people are allergic to cashew nuts.