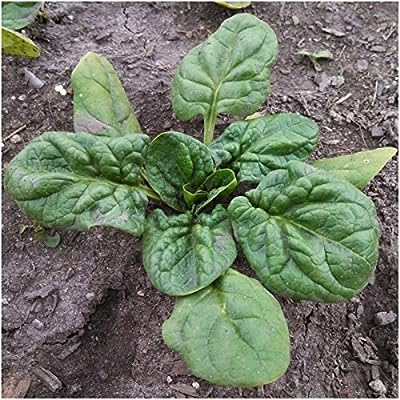 Price: $6.35
As of 2022-08-10 13:32:16 UTC (more info)
Product prices and availability are accurate as of 2022-08-10 13:32:16 UTC and are subject to change. Any price and availability information displayed on https://www.amazon.com/ at the time of purchase will apply to the purchase of this product.
Availability: In Stock
Click and Choose Options
Buy Now from Amazon
In Stock.
Product Information (more info)
CERTAIN CONTENT THAT APPEARS ON THIS SITE COMES FROM AMAZON SERVICES LLC. THIS CONTENT IS PROVIDED 'AS IS' AND IS SUBJECT TO CHANGE OR REMOVAL AT ANY TIME.

Quality Spinach seeds packaged by Seed Needs. Intended for the current and the following growing season. Packets are 3.25" wide by 4.50" tall and come with a full colored illustration on the front side, as well as detailed sowing instructions on the reverse. Giant Nobel is a heirloom variety of Spinach that was first introduced in the 1920's. It's large leaves will span 24 to 26 inches wide and each plant will stand about 12 to 16 inches tall. Giant Nobel is primarily grown for it's use in salads and can be served steamed or freshly cut. Since Spinach is a cool weather crop, it is popularly grown in the Northern states, but can be successfully established in early Spring and late Fall. Giant Nobel Spinach is categorized as an annual crop. Annuals such as this will produce edible leaves fairly quickly, and will later bolt, or "go to seed" after the warm temperatures of Summer arrive. All Spinach seeds sold by Seed Needs are Non-GMO based seed products and are intended for the current & the following growing season. All seeds are produced from open pollinated plants, stored in a temperature controlled facility and constantly moved out due to popularity.