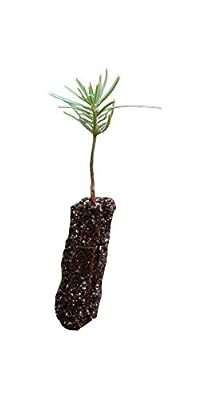 Price: $6.99
As of 2020-04-07 20:34:39 UTC (more info)
Product prices and availability are accurate as of 2020-04-07 20:34:39 UTC and are subject to change. Any price and availability information displayed on https://www.amazon.com/ at the time of purchase will apply to the purchase of this product.
Availability: Not Available Discontinued
Buy Now from Amazon
Product Information (more info)
CERTAIN CONTENT THAT APPEARS ON THIS SITE COMES FROM AMAZON SERVICES LLC. THIS CONTENT IS PROVIDED 'AS IS' AND IS SUBJECT TO CHANGE OR REMOVAL AT ANY TIME.

Native to the Western United States, Rocky Mountains, and Western Canada, White Fir (Abies concolor) is probably the best choice among the True Firs to grow in yards and gardens across America. This tree is tolerant of most climates and city conditions, and, while it does have its preferences (full sun, well-draining soils), it is far less fussy about soil types, moisture, heat, and sun exposure than most firs. Indeed, it is the most amenable to cultivation of all the fir species, and though hailing from the West, it is without a doubt the easiest fir to grow in the Eastern U.S. as well.

White Fir's Latin name "concolor" refers to the tree's uniform needle color - pale bluish-green on both sides, unlike most firs, which usually display the silvery stomata bloom only on their undersides. The needles of White Fir are also longer (up to 3 inches long) than the needles commonly observed on most firs. Closely related to Grand Fir, White Fir is typically under 100 feet tall, with uniform needles upwardly curved like a ribcage.

This highly symmetrical tree is a popular Christmas Tree species, with a marvelous citrus smell when the foliage is bruised. It is also a favorite of landscapers, who appreciate its ability to hold a dense, formal shape as it slowly grows into old age, stacking up orderly whorls of four or five branches in flat horizontal sprays.

About Jonsteen's Seedlings: All of our trees are seed-grown - without poison or pesticides - at our nursery on California's Redwood Coast, which is inspected monthly and licensed by the California Department of Agriculture.

About Jonsteen's 100% Guarantee: All of our trees are guaranteed to arrive healthy and in good condition. If your tree perishes, we will replace it with a small-sized seedling for just the cost of shipping/handling ($4.60).

The most versatile of the True Firs Tolerant of most climates and city conditions Needles grow uniformly and upwardly curved, like a ribcage A popular Christmas Tree species 100% guaranteed!