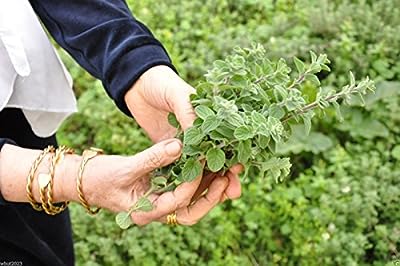 Price: $3.95
As of 2021-09-25 03:37:57 UTC (more info)
Product prices and availability are accurate as of 2021-09-25 03:37:57 UTC and are subject to change. Any price and availability information displayed on https://www.amazon.com/ at the time of purchase will apply to the purchase of this product.
Availability: In Stock
Click and Choose Options
Buy Now from Amazon
In Stock.
Product Information (more info)
CERTAIN CONTENT THAT APPEARS ON THIS SITE COMES FROM AMAZON SERVICES LLC. THIS CONTENT IS PROVIDED 'AS IS' AND IS SUBJECT TO CHANGE OR REMOVAL AT ANY TIME.

Zaatar is a Middle Eastern perennial that is used as a sort of condiment, generally mixed with other herbs and spices, such as sesame seeds, black cumin, fennel, onions, and salt, all blended in olive oil and used as a spread, like a nut butter. It has an oregano-like aroma and taste and makes a marvelous dipping sauce for bread. It likes full sun and sandy, quick-draining soil. Its yield is abundant in the first year. This is the new spice you MUST add to your garden this season! Widely used in the Middle East (especially Jordan, Lebanon, and Israel, where it is native) to flavor meats and breads, it is a wonderfully heady, richly scented and 'spicy' seasoning that combines the flavors of Marjoram, Oregano, and Thyme. Easy to grow on deer-resistant plants in poor to average soil, it makes a nice perimeter planting for the herb garden. A member of the Origanum family, Zaatar Marjoram is actually closer in flavor to a mild Thyme than to the Sweet Marjoram with which we are familiar in this country. It is commonly used to season grilled mutton, and is also added to breads. Highly aromatic, it is the key ingredient of a popular spice blend of the same name in Jordan; in Israel, a similar blend also relies on Zaatar. If you eat or want to try Middle Eastern cuisine, Zaatar Marjoram is a key ingredient! Zaatar is easy to grow and quite ornamental. The plant reaches about 3 feet high and wide, topped with flowerspikes that are also used (along with the leaves) in seasoning. It blooms in late spring to early summer, and actually prefers poor to only moderately fertile soil, preferably alkaline (lime-based). It also does well in containers -- jsut give it plenty of sunshine, very little if any fertilizer, and it's on its way in no time! The opportunity to add a new seasoning to our repertoire is rare indeed, and Zaatar will be a fine conversation starter as well as a point of interest in the garden. All your friends who garden and/or cook will want a sprig of this plant to try, so plant a few extra and enjoy even more spicy fragrance and great flavor this summer and for months to come! Hardy in zones 8-10, but grown as an annual everywhere else. Pkt is 100 seeds.